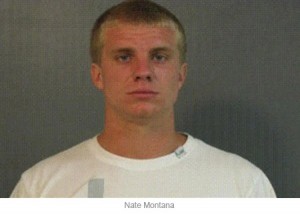 After last season’s bust, the Fighting Irish are not getting the good start to their school year like they wanted to. 11 Notre Dame football players were arrested at a house party in South Bend. The players were mainly freshmen and sophomores, but Joe Montana’s son (pictured above), Nate a walk-on quarterback, was among those charged with underage drinking.

In total 43 were arrested, including two basketball players and a hockey player. According to WNDU.com, “All those arrested were held overnight until their blood alcohol content had dropped to legal levels.”

In their defense, they were just living up to the Irish name.