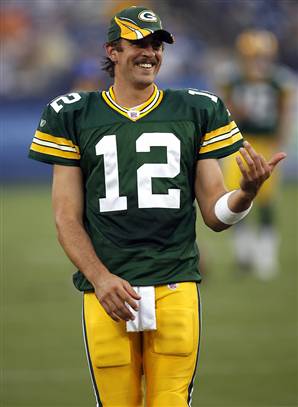 Aaron Charles Rodgers (born December 2, 1983 in Chico, California, U.S.) is an American football quarterback for the Green Bay Packers of the NFL. Rodgers was drafted in the first round (24th overall) of the 2005 NFL Draft by the Green Bay Packers. Rodgers played college football at the University of California, Berkeley, where he set several school records, including lowest interception rate at 1.43%.

Share It
Posted in Bios and tagged Aaron Rodgers. Bookmark the permalink.