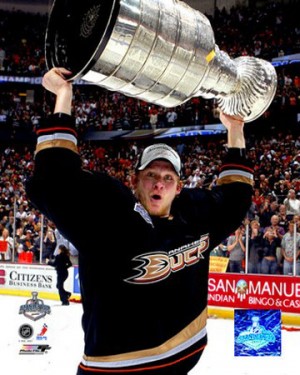 Corey Perry (born May 16, 1985) is a Canadian professional ice hockey winger currently playing for the Anaheim Ducks of the National Hockey League (NHL). Drafted out of the Ontario Hockey League (OHL), he captured a Memorial Cup with the London Knights and a gold medal with Team Canada at the World Junior Championships during his major junior career. He was selected by the Ducks 28th overall in the 2003 NHL Entry Draft and won the Stanley Cup with the club in 2007. In 2010 he won the Olympic Gold Medal with Canada at the Vancouver Games.

Share It
Posted in Bios and tagged Corey Perry. Bookmark the permalink.