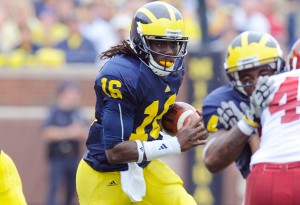 Denard Xavier “Shoelace” Robinson (born September 22, 1990) is an American football quarterback and track and field sprinter from Deerfield Beach, Florida. Robinson is currently the starting quarterback for the 2010 Michigan Wolverines football team. He holds the Michigan single-game record for total offense and the Big Ten Conference single-game record for rushing yards by a quarterback. He is also the only player in NCAA Division I FBS history other than Vince Young to both pass for 200 yards and rush for 200 yards in a regular season game twice in his career.

He enrolled at the University of Michigan in 2009 and was the school’s second-string quarterback as a true freshman. In the 2010 season opener against Connecticut, Robinson broke Michigan’s single-game record for total offense with 383 yards and also broke the single-game record for rushing yards by a quarterback. He shattered his own records in his second start as quarterback against Notre Dame with 258 rushing yards and 502 yards of total offense. After five starts at quarterback, Robinson had the top three single game performances in total offense (502 yards against Notre Dame, 494 yards against Indiana, and 383 yards against Connecticut).

Robinson acquired the nickname “Shoelace” because he plays football with his shoelaces untied. He has run the 40-yard dash in 4.32 seconds, and as a member of the 2010 Michigan track team, he also recorded the team’s fastest competition time for the year in the 60-meter dash.

Share It
Posted in Bios and tagged Denard Robinson. Bookmark the permalink.