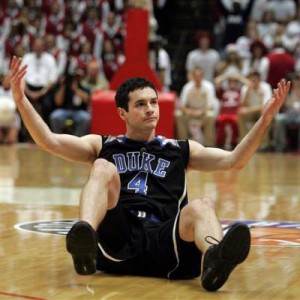 Jonathan Clay “J. J.” Redick (born June 24, 1984 in Cookeville, Tennessee) is an American professional basketball player at the shooting guard position who plays for the Orlando Magic. He was selected 11th overall by the Orlando Magic in the 2006 NBA Draft. During his collegiate years, Redick played for Duke University. Duke retired his jersey on February 4, 2007.

Redick is known for his free throw and three-point shooting. He set ACC records for most points (which has since been surpassed by Tyler Hansbrough, formerly of the University of North Carolina), consecutive free throws made, and most career ACC tournament points; and set several Duke records, including most points in a single season. Redick is currently the all-time leading scorer for Duke.

Share It
Posted in Bios and tagged JJ Redick. Bookmark the permalink.