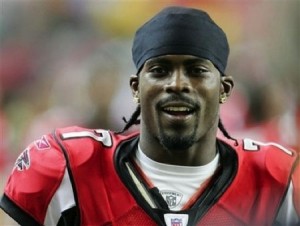 Michael Dwayne Vick (born June 26, 1980) is an American football quarterback for the Philadelphia Eagles of the National Football League. He played for the Atlanta Falcons for six seasons before serving time in prison for his involvement in an illegal dog fighting ring.

Vick played college football at Virginia Tech, where as a freshman he placed third in the Heisman Trophy balloting. He left after his sophomore year to enter the NFL and was drafted first overall by the Atlanta Falcons in the 2001 NFL Draft. He became the first African-American quarterback to be selected first overall in an NFL Draft. In six seasons with the Falcons, he gained wide popularity for his performance on the field, and led the Falcons to the playoffs twice. Vick ranks third among quarterbacks in career rushing yards.

In April 2007, Vick was implicated in an illegal interstate dog fighting ring that had operated over five years. In August 2007, he pleaded guilty to federal felony charges and served 21 months in prison, followed by two months in home confinement. With the loss of his NFL salary and product endorsement deals, combined with previous financial mismanagement, Vick filed for Chapter 11 bankruptcy in July 2008. Falcons owner Arthur Blank did not want Vick on the Falcons, and after attempts to trade him failed, Vick was released. He signed with the Philadelphia Eagles and was reinstated in Week 3 of the 2009 season.

Share It
Posted in Bios and tagged Michael Vick. Bookmark the permalink.