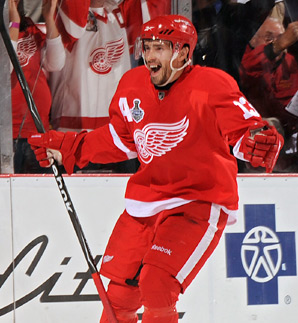 Pavel Valerievich Datsyuk (Russian: Па́вел Вале́рьевич Дацю́к, IPA: [ˈpavʲɪl dɐˈt͡sjuk]; born July 20, 1978) is a Russian professional ice hockey player and alternate captain for the Detroit Red Wings of the National Hockey League (NHL). He is known for his stick-handling and is considered one of the best two-way forwards in the game today, having won the Frank J. Selke Trophy in the 2007–08, 2008–09 and 2009–10 NHL seasons. Datsyuk has also won four consecutive Lady Byng Memorial Trophies for performance and sportsmanship. He was nominated for the Hart Memorial Trophy as the league’s most valuable player following the 2008–09 season. Datsyuk won the Stanley Cup in 2002 and 2008 with the Red Wings. A techno version of the Russian folk song Kalinkais played when he scores a goal.

Share It
Posted in Bios and tagged Pavel Datsyuk. Bookmark the permalink.