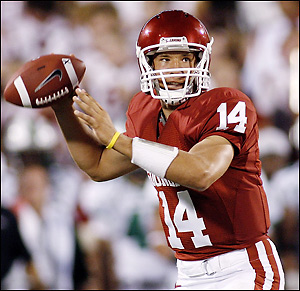 Samuel Jacob “Sam” Bradford (born November 8, 1987) is an American football quarterback for the St. Louis Rams of the National Football League. He was the first overall pick in the 2010 NFL Draft, and played college football at Oklahoma. In 2008, as a redshirt sophomore, Bradford became the second sophomore to win a Heisman Trophy. Bradford also holds the NCAA record for most touchdown passes by a freshman quarterback, with 36.

Share It
Posted in Bios and tagged Sam Bradford. Bookmark the permalink.