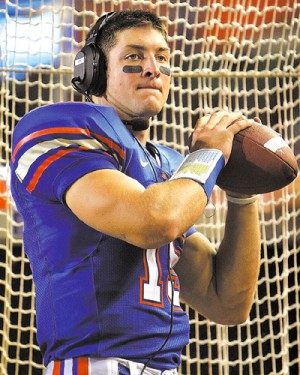 Timothy Richard “Tim” Tebow (pronounced /ˈtiːboʊ/; born August 14, 1987) is an American professional football player who is a quarterback in the National Football League (NFL). Tebow played college football for the University of Florida, where he won the 2007 and 2009 BCS National Championships and the Heisman Trophy. He was chosen in the first round of the 2010 NFL Draft and is now a backup quarterback for the Denver Broncos of the NFL.

Tebow played quarterback for Nease High School in Ponte Vedra Beach, Florida, and was ranked among the top quarterback prospects in the nation as a high school senior, and ultimately chose to attend the University of Florida. Tebow was a dual threat quarterback adept at rushing and passing the football. As a college freshman, the Gators coaches largely used him as a change of pace to the Gators’ more traditional passing quarterback, Chris Leak. Tebow’s contribution to the Gators’ 2006 college football season was as a key back-up who helped the Gators win college football’s national championship game for the first time since 1996.

Share It
Posted in Bios and tagged Tim Tebow. Bookmark the permalink.