Posted on September 18, 2010 by thejerseychaser

The Black Eyed Peas have been announced as the 2011 Super Bowl halftime performers. This year’s Super Bowl XLV will be played in Dallas at Cowboys Stadium. The Black Eyed Peas are no stranger to the Super Bowl, with past experience performing at the 2005 Super Bowl pregame party and the 2009 Super Bowl kickoff concert in Pittsburgh. Hopefully Fergie won’t have any wardrobe 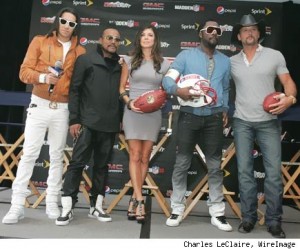