Posted on January 5, 2010 by thejerseychaser 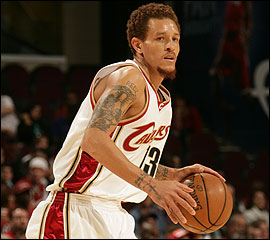 Delonte Maurice West (born July 26, 1983, in Washington, D.C.) is an American professional basketball player currently with the Boston Celtics for the second time in his career. West played on the Cleveland Cavaliers with LeBron James and allegedly had an affair with Gloria James. in September 2009, West was pulled over for a traffic violation and after a search of his car, it was found he illegally possessed a fire arm.

Share It
Posted in Bios and tagged Delonte West. Bookmark the permalink.