Could the Pistons be moving to Las Vegas? A Las Vegas investment firm is trying to bring an NBA team to Sin City. Th group, International Development Management LLC said its close to buying an NBA team, but the sale will only go through if the proposed arena is approved by the county.

The team in question remains a mystery. There are four NBA teams up for sale: Atlanta, Golden State, Memphis, and DETROIT. Despite the Pistons’ history in the Motor City, many are speculating a move to Las Vegas because of the Detroit’s struggling economy. 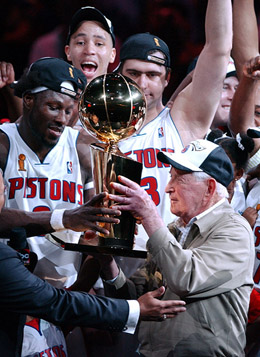 Karen Davidson put the Pistons on the market after the passing of her husband Bill Davidison, who died at the age of 86 on March 13, 2009. Davidson has said she would like to sell the Pistons to a local owner, but it remains weary if Detroit can still support four sports teams.

Share It
Posted in NBA and tagged Detroit Pistons, NBA. Bookmark the permalink.