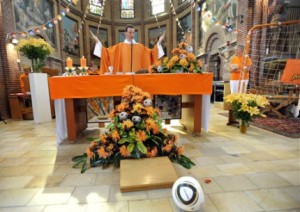 A Catholic Priest held an all-orange Mass to pray for the Netherlands before their World Cup final against Spain. The Priest needed to pray harder since Spain won, 1-0. Now, to make matters worst, the Priest has been suspended.

Bishop Jozef Punt of Harlem said in a statement that Rev. Paul Viaar of Obdam village, “did not do justice to the sacred nature of the Eucharist.” The all-orange service caused outrange among the Dutch Catholic community.

“People do not understand it. Everybody supports Pastor Paul and we don’t see what was so bad that he should be temporarily suspended,”  Church vice-chairman Win Bijman said.

Viaar decorated the church with orange flags and wore an orange robe. Viaar even acted as a goalkeeper and kicked a football down the aisle.

Share It
Posted in Other Sports and tagged World Cup. Bookmark the permalink.