Posted on August 25, 2010 by thejerseychaser

The ink has not even dried on the divorce papers, and Elin Nordegren has given an exclusive interview to People magazine. Elin’s reps allegedly reached out to the magazine in what she says will be her only interview about her divorce from Tiger Woods. In the article, on news stands this week,Elin said: “I have been through the stages of disbelief and shock, to anger and ultimately grief over the loss of the family I so badly wanted for my children.” 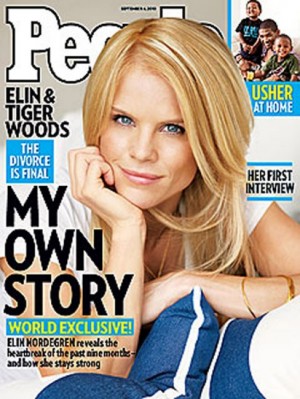 Elin reveals that her and Tiger tried for months to reconcile, and she has not watched any golf since November. The couple will share custody of their two children, and Elin plans to raise her kids in Florida to be close to Tiger.

“My immediate plan is for the kids and me to continue to adjust to our new situation. I am going to keep taking classes, but my main focus is to try to give myself time to heal,” she says.

Elin is 40 credits shy of receiving her bachelors degree in psychology.

In the most revealing quote of the article, Elin said she had no idea about Tiger’s affairs and was in “absolute shock and disbelief. I felt stupid as more things were revealed. How could i have not known anything?”

The nine months of stress and filing for divorce have caused hair and weight loss, but Elin said, “I also feel stronger than I ever have. I have confidence in my beliefs, my decisions and myself.”

When asked about the notorious Thanksgiving night, the only information Elin would give was: “speculation I would have used a golf club to him is just truly ridiculous.”

In regards to how much money she received in the divorce settlement she remained mum except saying, “money can’t buy happiness or put the family back together.”

In total, the interview lasted 19 hours and was split up over the course of 4 days.