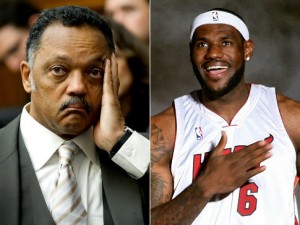 After LeBron James announced he would not be returning to Cleveland, Cavilers owner Dan Gilbert wrote an open letter to Cavs fans criticizing LeBron. Now, African American activist Jesse Jackson has come to LeBron’s defense. According to Jackson, Gilbert views LeBron as a “runaway slave” and “speaks at the “owner of LeBron and not the owner of the Cleveland Cavilers.” Jackson went on to say “His feelings of betrayal pesonify a slave master mentality. This is an owner employee relationship- between business partners- and LeBron honored his contract.”

Jackson believes Gilbert should face a “challenge” from the league and players’ association for his “mean, arrogant, and presumptuous comments.”