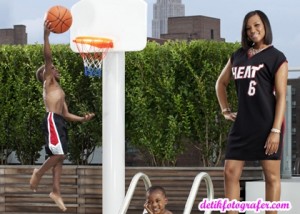 The usual quiet Savannah Brinson, LeBron Jame’s girlfriend and baby mama speaks out on her relationship with LeBron, moving to Miami, and marriage in the newest issue of Harpers Bazaar.

In the article, Brinson talks about her new fame, “Now that magazines and the paparazzi are taking pictures of me, it’s kind of weird. I never thought it would get to this magnitude, but clearly I was mistaken.”

Brinson, a native of Akron, was also mistaken about the fans’ reaction to LeBron leaving Cleveland, ”You have fans and you think they’re going to roll with you no matter what, and then they burn your jersey? It’s unfair, but they did it. It’s over.”

Brinson reveals, “Personally, Miami was not my favorite place. Vacationing there is great. You go for three days and get some sun and it’s time to go home.”

Brinson will split her time between Akron and Miami, in which she says will, “it will definitely be an adjustment.”

Together, the couple have two children, but LeBron refuses to marry. “I’ve definitely not put a fire under his ass. I would never rush him to do something like that,” Brinson said. “We’re really comfortable with the way things are now. And it’s not up to me. When it happens, it happens. Brinson added,“We talk about it. If we do it, I want it to be forever. I’m the mother of his children, I’m not a baby mama. There’s a lot more to me than that.”

LeBron also values his relationship telling Harper Bazaar, “A person like myself always needs a great sidekick and a person you can rely on no matter the circumstances. And she’s that. She’s got my back, and I love her for that.”

The newest issue of Harpers Bazaar is out on August 17!