Although Sports Illustrated would have never written an article for their NFL Preview on Miles Austin if he wasn’t dating Kim Kardashian, it is still worth mentioning. Never being a big fan of Reggie Bush, Kardashian’s new beau is a hard worker, an artist, and a late bloomer. The article is in the latest issue of Sports Illustrated and covers Austin’s long road to becoming a Jersey Chased.

Austin did not start playing football until his junior year of high school. A star athlete in basketball and track, Austin was forced to join the football team as punishment for showing up late for school. A natural, in his two years at Garfield high school, Austin had 65 catches, 1,675 yards and 15 TDs. Flying under the radar of DI recruiters, Austin went on to play football at I-AA Monmouth University.

Like his high school career, Austin put up big numbers at Monmouth but failed to track the attention of NFL scouts. An undrafted Austin signed with the Cowboys as a free-agent after legendary former Cowboys coach Bill Parcells called him.

Despite signing with the Cowboys, Austin’s playing chances were grim, spending his first three seasons on special teams. Austin got his big break when the departure of Terrell Owens left an opening for a receiver in the Cowboy’s lineup. In 2009, his first real shot at playing, Austin led the NFC in receiving yards and receiving touchdowns. A late coming out party, Austin was then selected to the 2010 pro-bowl. 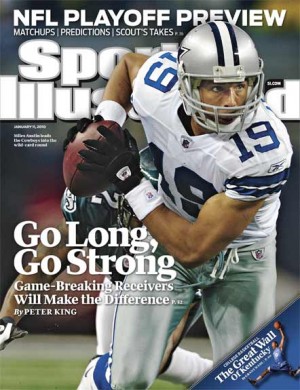 Austin comes from a blue-collar New Jersey background. His dad, Miles Jr., works as a truck driver and his mom teaches physical education to children with autism. Did I mention Austin also paints?

While Austin’s critics are skeptical if he can repeat his 2009 season, those around the 26-year old have no doubt believing in his talent and strong work ethic. Austin is also dating Kim Kardashian… so that is a guaranteed championship.