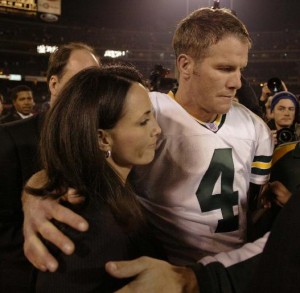 Yesterday, Deadspin.com released photos and voicemails of Brett Favre trying to seduce NY Jets sideline report Jenn Streger. The incident happened back in 2008, Favre’s lone season with the Jets. Now, two other women are coming froward saying they too were sexually harassed by Favre.

Both women worked as massage therapists for the Jets and were approached by Favre at training camp. Favre made crude comments to the first women while she was massaging another player. The second woman, who was massaging Favre, gave the veteran QB her phone number. According to NFL sources, it is not uncommon for players to call massesuses for extra massage sessions. But Favre wanted more than just a massage. The text messages got so out of hand the woman’s husband got involved and demanded an apology.

The couple contacted an attorney, but because the masseuse was a private contractor, there were no grounds for harrasment. Both women and the husband have chosen to remain anonymous.

In the meantime, the NFL is looking into Deadspin.com’s Jenn Streger allegations against Favre. Favre has been married to his wife Deanna for fourteen years, but the couple have dated since high scool. Deanna is a breast cancer survivor and has stood by Favre for two rehab stints.