Posted on August 24, 2010 by thejerseychaser 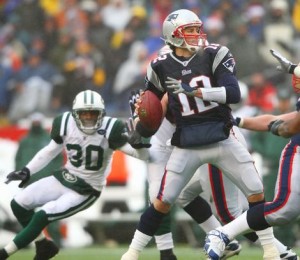 Ever since Tom Brady left a pregnant Bridget Moynahan for Gisele Bundchen he lost his Golden Boy appeal. Mr. Tom Too Cool for School Brady also apparently doesn’t have a sense of humor. Hard Knocks is the new HBO series giving the behind the scene look of the NFL as it follows the New York Jets training camp. It shares some hilarious moments, just ask Antonio Cromartie, but the Golden Boy is not interested.

The New England Patriots QB told the Boston Herald: “You know, I haven’t turned it on. I hate the Jets. I refuse to support that show. . . I’m sure it’s great TV and I’m glad people are liking it. But that’s something I have no interest in watching. I’d love to say a lot of mean things, too, but I’d rather not do that, either.”

One Response to Tom Brady hates the NY Jets