Posted on April 8, 2012 by thejerseychaser

If you are going out of the country, maybe it is best not to tell the media. White Sox GM Kenny Williams was on a scouting trip to the Dominican Republic when his house was broken into. The Chicago-area man stole clothing, jewelry and Williams’ 2005 World Series ring.

But the burglar didn’t stop there, drinking Williams’ beer, defrosting a lobster and surfing the web.

The intruder left behind a hospital bracelet, which helped police put the man behind bars, when police found him wearing Williams’ clothes and the GM’s 2005 World Series ring.

The man is expected to be in bond court on Tuesday, and no it is not Ozzie Guillen.

The Gold Glove is one of the most prestigious awards in baseball. 18 awards are handed out each season to the best player in their position in both the National and American leagues. Winners are voted on by league managers and coaches. Today it was announced White Sox pitcher Mark Buehrle has won his second Golden Glove for AL pitcher, the problem is it wasn’t the MLB who announced it. Instead, Buehrle’s wife, Jamie Buehrle took to her Facebook to deliver the news. In a Facebook status Buehrle wrote, “So proud of my husband. He is now a Two time gold glove winner!!!”

The MLB is scheduled to announce the 2010 Gold Glove winners Tuesday and Wednesday, well at least we’ll find out the other 17 winners.

Props to my employers the Chicago Tribune for breaking this story 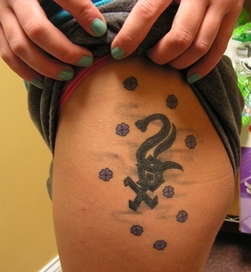 A Chicago White Sox fan is suing a tattoo parlor in Chicago for permanently inking the White Sox logo BACKWARDS on her thigh. 20-year old Eugenia Bebis is suing Mystic Tattoo Art and Body Piercing for $50,000 is damages. Bebis said she had to go through extensive laser tattoo removal after she got her backwards tattoo just three months ago. Bebis will also get another larger tattoo to cover up the laser faded old one… advice to Bebis, make sure the new tattoo isn’t backwards again!