Posted on September 15, 2011 by thejerseychaser

The Detroit Tigers are on their longest winning streak in 77-years… and manager Jim Leyland is on a dirty underwear streak since he is wearing the same pair since his Tigers lost their last game on September 1.

Leyland reveled his dirty little secret when he told reporters: “I will wear these underwear until we lose. I can tell you that right now. And they will not be washed. And I don’t give a (expletive) who knows it.”

Along with his underwear, Leyland has worn the same pair of socks since that streak began, which now has holes in them.

“I told (Jim) Schmakel [Tigers clubhouse manager] if somebody threw them out, that would be the end,” Leyland said.

Leyland has good reason to be cautious, the Tigers have blown notorious leads in September during the last month of the MLB season… but now its only the competition smelling fear. The Tigers have a 14 game lead in the AL Central division. 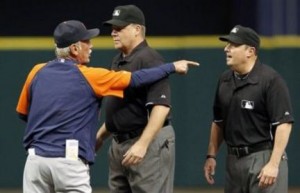