Posted on September 29, 2012 by thejerseychaser

Looks like a personal foul is being called on Bachlorette  Emily Maynard. In August, US Weekly had Jef Holm’s brother accused Maynard of texting with another man. Now, the magazine has revealed the texter was Oakland Raider quarterback Matt Leinart.

Holm’s ex Kaylee Shepherd confirms the rumors, “He said the story was 100 percent accurate. When she put her phone down, [Jef] picked it up and read through everything. . . Jef said, ‘It was that pro football guy . . . She strung me along and was talking to another guy the whole time!’”

This is the second Bachlorette Leinart has been linked to. In July 2010, the same cheating rumors were linked to Leinart and Ali Fedotowsky, who was engaged to Roberto Martinez a the time. As the Raiders backup QB, it looks like Leinart gets more action off the field.

Bachelorette hooking up with Matt Leinart 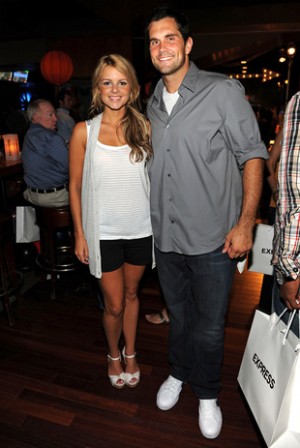 Ali Fedotowsky from the Bachelorette is being linked Arizona Cardinals backup quarterback Matt Leinart. The two apparently met at this week at the former USC star’s Bowling with the Stars charity event at Lucky Strikes in Hollywood. Leinart and Fedotowsky exchanged numbers and have been textually active.

The finale of the Bachelorette is this Monday, but sources say Fedotowsky picks neither Roberto or Chris… and it looks like she has moved on!