Posted on February 11, 2011 by thejerseychaser

Yesterday, TJC reported Carrie Underwood’s husband Mike Fisher was traded from the Ottawa Senators to the Nashville Predators, and the move is not sitting well with Senators fans.

Ottawa’s most popular radio station is now banning Carrie Underwood, vowing never to play her songs again. Underwood is being blamed for the trade, Fisher has spent his entire career with the Senators and now moves to Nashville to be closer to his wife.

“We know Mike Fisher is not to blame for this trade but feel he was lured away from Ottawa by a country-music superstar. Sure, she’s pretty. Yes, she can sing. But can she play hockey? Can she put one on the top shelf with a slap shot? No!… This is a wretching announcement and the city is completely upset. He’s been here for 10 years, he’s the second most popular player and it’s awful.”

As the NHL trading deadline draws near, Carrie Underwood’s husband Mike Fisher has been traded to the Nashville Predators. Drafted by the Ottawa Senators, Fisher spent his entire NHL career in the Canadian capital. The Yoko Ono move comes as a surprise to players and Senators.

“You’re surprised right away, and sad…Unfortunately, this year we haven’t been able to play the way we’re capable of and we all know the reality that comes with it,” captain Daniel Alfredsson said.

While the Senators are in second to last place in their conference, the move comes as a convenience to Fisher. Since marrying in July, Fisher has been living apart from Underwood who is based in Nashville.

At last night’s Country Music Awards Carrie Underwood dissed Brett Favre and Tiger Woods in her opening monologue. Carrie Underwood is a jersey chaser herself and is married to hockey player Mike Fisher. Underwood and fellow host Brad Paisley took the shot at Favre and Woods at the 2:45 mark. 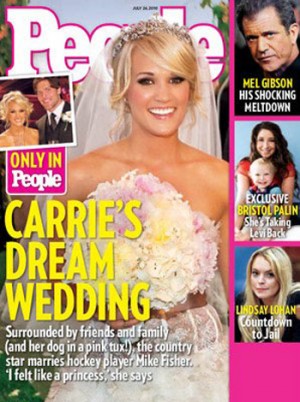 Carrie Underwood is on the cover of the newest issue of People on newsstands this Friday. Underwood married Ottawa Senators captain Mike Fisher. Photos of their wedding went for a reported $2 million.