Posted on August 8, 2012 by thejerseychaser

Mike Modano and Will Ford divorce

Willa was here and now she is not. The pop singer and NHL husband Mike Modano are divorcing after five years of marriage. Ford and Modano began dating in 2001 before marrying in a small Texas ceremony in 2007. Prior to Modano, Ford dated Nick Carter from the Backstreet Boys.

In a joint statement, the couple told PEOPLE,”It is with great sadness that after five years of marriage, Willa and Mike have decided to divorce. They remain friends and wish each other success and happiness.”

Modano retired in September after 21 seasons in the NHL, 20 with the Dallas Stars. During the 2007 NHL playoffs, Ford blogged for NHL.com chronicling the Stars Cup run. 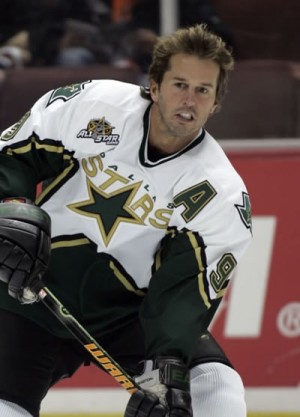 American hockey superstar Mike Modano has agreed to a 1 year/ $1.25 million contract with the Detroit Red Wings. Modano played 20 seasons with the Dallas Stars before the team that drafted him decided to let him go this offseason.

A Detroit native is expected to be a third line center and wear No.90. The Red Wings have scheduled a press conference for Friday at 2:30pm to welcome the future hall-of-famer.