What makes the Stanley Cup the most coveted trophy in all of sports is that each player’s name is not only inscribed on Lord Stanley but every player also gets their own day with the Cup. But Boston Bruins Nathan Horton’s day was cut short after the Cup missed its flight from Boston to Canada. Horton planned a parade in his hometown of Dunville, Ont. Unfortunately, the guest of honor arrived three hours late. According to Horton’s wife, the Cup was “lost” at Logan Airport in Boston, Mass.

But a JetBlue spokesperson said, “The Stanley Cup was actually never lost. The person traveling with the Cup checked it in at 7:37am, for an 8:00am flight.” The Keeper of the Cup is Phil Pitchard and is off to take the Cup to Sweden and the Czech Republic next. Ironically, Pitchard was famously featured in a Master Card commercial when he gets stuck in the airport.

The FBI is stepping in to help find the puck from the Stanley Cup game winning goal scored by Chicago Blackhawks Patrick Kane. The puck has been missing ever since Kane scored the overtime goal clinching the Stanley Cup for the Blackhawks in six games against the Philadelphia Flyers. Footage from the game shows NHL linesman Steve Miller skating towards the net and picking up the puck. Not only is the FBI getting involved but Grant Deporter, CEO of Harry Caray’s, offered a $50,000 reward for the missing puck. The FBI is searching for the puck on their own time to get to the bottom and find out what the puck happened?!? 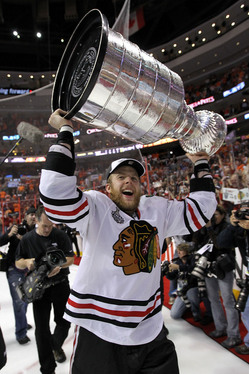 Since winning the Stanley Cup with the Chicago Blackhawks, Kris Versteeg has had some bad luck. The 24-year old forward was first traded to the Toronto Maple Leafs, who have failed to make the playoffs for the past five seasons. Now, after winning the Cup, Versteeg’s name has been misspelled on the Hockey Holy Grail. The S and the T were reversed in Versteeg’s name, but he is taking the tyepo in stride.

“It’s kind of funny. I may never be one of the biggest names in the game but now it’ll go down in history as one of the misspells on the Stanley Cup so I’ll take it,” Versteeg said. “It’s just a perfect example of my life. Just something crazy and quirky that’s always happening to me.”

The Chicago Blackhawks were presented with their 8-carat Stanley Cup Championship rings in a private ceremony Wednesday night. “I was sitting next to [coach Joel] Quenneville, and he showed me his [1996 ring] from Colorado,” Hawks winger Troy Brouwer said. “And ours is so much bigger and nicer.” The individual ring is valued at $30,000 and is 14-carat white gold.

The Chicago Blackhawks will have their Stanley Cup Opening Ceremony October 9 against the Detroit Red Wings.