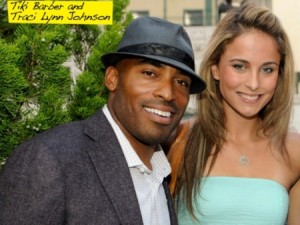 That’s what you get for leaving your pregnant wife…. the ex-wife of former New York Giants superstar Tiki Barber is demanding $150,00 a month in alimony and child support… however, Barber is saying he is too broke to pay the divorce settlement.

Barber’s ex-wife Ginny has denied the amount saying it is ridiculous and she does not even have a nanny. Still, sources are saying Barber is trying to low-ball Ginny. Recenlty, Barber was fired as an NBC “Today Show” correspondent, in which he made $300,000.

In April, Barber left Ginny for a younger women while she was pregnant with twins. The couple have four children together and were college sweethearts.

Share It
Posted in Celebrity News | Tagged jersey chasing, NFL, Tiki Barber | Leave a comment
Posted on May 29, 2010 by thejerseychaser

Tiki Barber banned from waiting room for birth of twins

Former NY Giants running back Tiki Barber was banned from the delivery room during the birth of his twin daughters. Apirl’s Jersey Chaser of the Month was Tiki Barber homewrecker, 23-year old Traci Lynn Johnson. Johnson broke up Tiki’s 11-year marriage with wife Ginny. Tiki and Ginny were college sweethearts where they met at the University of Virginia. The couple have two sons and were expecting twins when Ginny found out abuot Tiki’s affair with the NBC intern (Tikki is a correspondent for the Today Show). While Tiki was banned from the delivery room, he was at the hospital and did see the twin girls after they were born. Wonder if Johnson will be on diaper duty…?