Bryce Harper has taken the Major League by storm and has created a storm of his own with Miami Marlin manager Ozzie Guillen. Three years ago, Harper became the youngest baseball player to appear on the cover of Sports Illustrated, and he is living up to his hype. The fearless 19-year old is batting third best on his team,taking on clown-reporters (which you may have heard your boyfriend say) and not backing down to outspoken Guillen.

Over the weekend, Guillen accused Harper of using too much pine tar on his bat. The Nationals won 4-0 and Guillen called Harper of unprofessional after he retaliated and pointed to his bat in his second-plate appearance.

Despite Harper offering no comment, Nationals Adam LaRoche further instigated the fued. LaRoche asked Harper to autograph a bat and later addressed it to Guillen with pine tar smeared all over it.

Guillen found humor in the gag gift telling reporters, “It was funny. I’ve got a few friends on their side. All those guys were making fun of me. I found out later they made the kid sign the bat.’”

Washington Nationals catcher Wilson Ramos has been kidnapped from his native Venezuela. The 24-year old is spending winter in Venezuela to play with the Tigres de Aragua.

According to the Washington Post: Four people, armed, went into Ramos’s family’s house Wednesday night and took Ramos, and only Ramos, out of the house, put him in a green vehicle and sped away, according to multiple news reports out of Venezuela. Ramos’s family has not established communication with the kidnappers, the reports said.

In 2009, a crime and safety report found that for every 100,000 Venezuelas 9.2 incidents kidnappings. Thoughts and prayers to Ramos and his family! 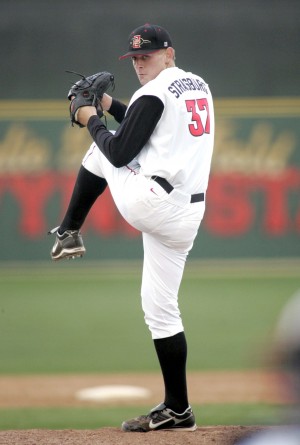 The most highly anticipated rookie in baseball history is facing a possible season ending injury. Stephen Strasburg left the fifth inning of Saturday’s Washington Nationals’ game against the Philadelphia Phillies with a strained flexor tendon in his right forearm. He will undergo an MRI to see the severity of the injury.