LeBron James, Dwyane Wade, Carmelo Anthony, and other NBA stars were on hand to play in a charity basketball game for wounded troops… also playing President Barack Obama. Also joining the all-star team were retired legends Magic Johnson and Bill Russell. The game was at Washington’s Fort McNair and was closed to media. After the game, Obama invited the NBA players to a barbecue at the White House. 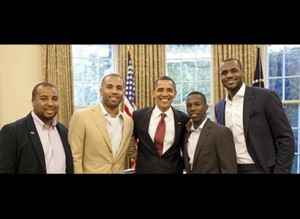