Orland Magic star and former Duke shooting guard JJ Redick has plans to release a rap album by the end of the year. Redick has been collaborating with Magic teammate Ryan Anderson. The duo have named their rap group James Clay. The name is derived from Anderson’s middle name James and Redick’s middle name Clay. 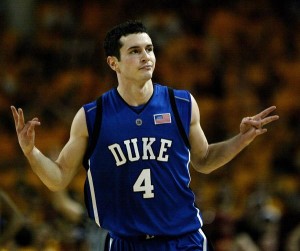 Redick first came on the rap scene in October 2009, when he shared his aspirations to release a rap album by the end of 2010. When asked about the pending album, Redick told a reporter, “The beat is sick man. It will get your head nodding.”

Redick has had a busy off season. Not only has he been writing for his new record, but Redick got married back in June.

Now Redick may not look like a rapper, but whoever said white man can’t jump?