One of baseball’s most controversial players is getting his own reality show. Pete Rose was banned from baseball in 1991 for betting on games. Now, the all-time hit leader will get a second chance at stardom.

TLC has signed on for the series, Pete Rose and Kiana Kim Family Project. Cameras will follow 71-year-old Rose and his thirtysomething Playboy model fiancée Kiana Kim. “She’s got younger kids and I’ve got [four adult] kids, and we go through the same things everybody else does: taking the braces off, making sure they get their education and they go to basketball practice or acting class,” Rose told Entertainment Weekly, “It’s not going to be classless like it seems like a lot of reality shows aren’t really reality.”

Hopefully MLB commissioner Bud Seilg is a TLC fan because Rose said, “If the commissioner [Bud Selig] ever finds it in its heart to give me a second chance, I’m sure that we’ll address the. But if I ever make the Hall of Fame, I’ll be the happiest guy in the world because I understand what it means.”

Legendary baseball manager Sparky Anderson has passed away at age 83 due to complications of demetia. Anderson was the first manager to win a World Series in both leagues (Detroit Tigers 1984, Cincinnati Reds 1975 & 1976). As a Detroit girl and Tigers fan this was very sad. As I was looking through YouTube, I found this PSA announcement from the 80s that sums up Sparky’s persona.

Philadelphia Phillies Ryan Howard was on David Letterman last night doing the Top 10 List. The Phillies swept the Cincinnati Reds in the first round of the playoffs and open the second round tonight against the San Francisco Giants. No.2 is my favorite… but I do not like No.9 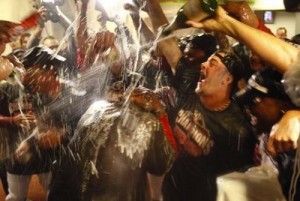 On Tuesday,  the Cincinnati Reds clinched their first division title and playoff appearance  in 15-years. The Reds beat the Houston Astros 3-2, when outfielder Jay Bruce hit  a walkoff home run. Celebrating in style, players smoked victory cigars in the clubhouse, causing five Cincinnatians, who were at home watching the game, to call the Health Department to report a violation.

Under Ohio law, no one can smoke indoors, which includes baseball parks. The Heath Department will send Reds owner Bob Castellini an official letter notifying him of the violation.Within the next 30 days, a health inspector will make an unannounced visit to the clubhouse to investigate further violations. If he finds anyone smoking in the clubhouse, the Reds will be fined $100.00. END_OF_DOCUMENT_TOKEN_TO_BE_REPLACED