One of baseball’s most controversial players is getting his own reality show. Pete Rose was banned from baseball in 1991 for betting on games. Now, the all-time hit leader will get a second chance at stardom.

TLC has signed on for the series, Pete Rose and Kiana Kim Family Project. Cameras will follow 71-year-old Rose and his thirtysomething Playboy model fiancée Kiana Kim. “She’s got younger kids and I’ve got [four adult] kids, and we go through the same things everybody else does: taking the braces off, making sure they get their education and they go to basketball practice or acting class,” Rose told Entertainment Weekly, “It’s not going to be classless like it seems like a lot of reality shows aren’t really reality.”

Hopefully MLB commissioner Bud Seilg is a TLC fan because Rose said, “If the commissioner [Bud Selig] ever finds it in its heart to give me a second chance, I’m sure that we’ll address the. But if I ever make the Hall of Fame, I’ll be the happiest guy in the world because I understand what it means.” 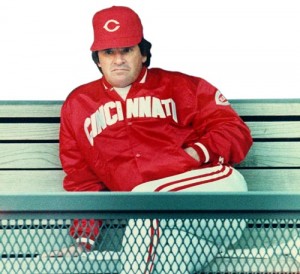 Pete Rose was banned from baseball in 1989, still the Cincinnati Reds want to honor Rose for the 25th Anniversary of Rose setting the all-time hitting record. Rose broke Ty Cobb’s hitting record on Sept. 11, 1985. Four years later, Rose was banned from the league and any MLB sanctioned events, however the Reds still invited Rose to commemorate the anniversary. Not surprising, Rose had a prior commitment to be at a Kentucky casino, so naturally, the Reds reschedule the ceremony for the following day. God bless Amurica.