He may not pay his child support but that isn’t stopping Dennis Rodman from authoring a children’s book. The NBA Hall of Famer is releasing his own book called “Dennis The Wild Bull,” set to be released in September just in time for back to school.

Despite being sentence to 104-hours of community service for unpaid child support, Rodman is dedicating the book to his children. “We’re not only excited about the project but we believe it’s a step in the right direction for Dennis,” said Rodman’s agent Darren Prince.

“Dennis the Bull” is being co-written with screenwriter Dustin Warburton, who said, “Dennis has a lot of great lessons to convey so needless to say it’s not only going to be fun, it’s going to spread a positive message which is what children’s books are all about.”

I wonder if this counts towards those 104 hours of community service?

Share It
Posted in NBA | Tagged Dennis Rodman, NBA | Comments Off
Posted on August 7, 2011 by thejerseychaser

It’s no secret Dennis Rodman has had a few hangovers in his day, and now the Worm has decided to develop a hangover cure in the form of a milkshake. Rodman has signed on to be the spokesperson for Gtox,

Gtox is available at Amazon.com for #2.50 for a four-ounce bottle. Bottoms up!

Share It
Posted in NBA | Tagged Dennis Rodman, NBA | Comments Off
Posted on August 1, 2010 by thejerseychaser 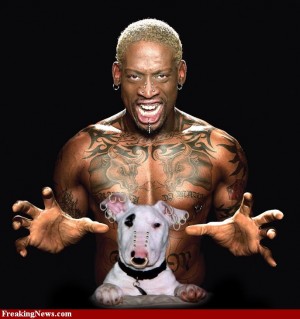 Former NBA star Dennis Rodman’s Land Rover flipped while driving on Interstate 95 near Fort Lauderdale. Rodman walked away from the accident unhurt, while the driver was taken to the hospital for precautionary measures. The NBA bad boy had just returned from St. Tropez where he was a celebrity DJ at a party.