Posted on May 3, 2011 by thejerseychaser

The NBA playoffs are the hottest tickets in town in Chicago, but there were two noticeable empty seats last night at the United Center for Game 1 of the Orlando Magic- Chicago Bulls second round matchup. Just before the end of the regular season, the Bulls and Magic faced eachother. After the game, Orlando’s Jameer Nelson was caught on camera telling Bulls’ Derrick Rose, “I’ll catch you in the second round.” But Nelson ran into one small road block, the Atlanta Hawks bounced the Magic in the first round.

Luckily, the Hawks were there to help Nelson out by leaving two tickets in his name at will-call at Chicago’s United Center. Head of Atlanta Hawks PR Arthur Triche tweeted, @HawksPRGuy, “Taking a page out of [former NFL coach] Jerry Glanville’s book, I think I’ll follow through on Jameer’s request to catch Derrick Rose in the 2nd round.”

While the tickets were not claimed, in Nelson’s defense they were in the 300 section!

Despite being the No.1 overall seed in the NBA, the Chicago Bulls struggled against the Indiana Pacers in Game 1 of the playoffs…that is until Derrick Rose scored 39 points to help the Bulls come from behind and win, 104-99. After the game, Pacers guard Danny Granger described Rose’s persistence like a “crazy stalker ex-girlfriend. Every time you tell her you don’t want to talk to her, she’ll show up at your door again.”

Back in October, Addias filmed a commercial with basketball stars Derrick Rose and Dwight Howard alongside comedian Ken Jeong. The video for the remake, “Fast Don’t Lie generated almost 2 million hits. Now, a second video has come out with an auto-tune remix of the song! Enjoy xoxo

Derrick Rose gets his own Skittles machine 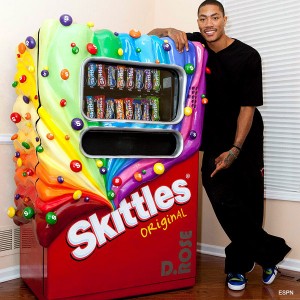 Wrigley, the Chicago based candy company, gave Chicago Bulls star Derrick Rose a pretty sweet gift. Rose is a Skittles junkie and was given a customized Skittles machine. Wrigley has promised to keep it fully stocked for the next three-years. When Rose walks passed the Skittles machine, a recording of Rose’s voice plays tempting him to have a pack. I bet Lamar Odom is angry he doesn’t have one!