Posted on August 24, 2011 by thejerseychaser

Move over Jay-Z and Beyonce… Brad Pitt and Angelina because Tom Brady and wife Gisele Bundchen have been named the highest paid celebrity couple by Forbes magazine. Mr. and Mrs. Brady ranked in over $76 million from May 2010-May 2011. The couple was joined by fellow jersey chasing couple David and Victoria Beckham, who pulled in a combined $45 million.

Despite Brady’s $18 million contract with the New England Patriots, Bundchen is the bread winner of the family earning over $45 million. Bundchen became the first billonaire super model with her own skincare line Sejaa and collobrations with Hope lingerie and Ipanema sandals. In addition to Brady’s $18 million contracts with the Pats he earned an additional $17 million in endorsements, who knew Uggs paid so well!

Best sports fans in America according to Forbes 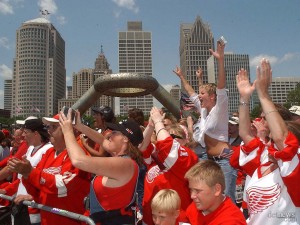 Forbes is known for its financial news and stock marketing analysis, but now the magazine has released a list of the top 16 sports fans in America. The list may surprise you with the New York Yankees coming in at No.14, and apparently being a US city didn’t meet Forbes’ criteria… the Montreal Canadians took the No.11 spot. Below is the rest of the list:

Chicago Blackhawks: After winning the Stanley Cup hockey is back on the map in Chicago…. and with their off season displacements, that Blackhawks spirit is being spread across the country!
Philadelphia Phillies
New York Yankees: Despite having a net worth of $1.6 billion, the Yankess only come in at No.14.
Cleveland Cavilers: With the departure of LeBron James, Dan Gilbert better keep the fans pepped up, but then again, Cleveland doesn’t have many sports teams to choose from.
LA Lakers: Even with their celebrity sports fans and two consecutive NBA titles, the Lakers come in at No.12.
Montreal Canadians: The French Canadian providence has always wanted to be independent, but apparently Forbes thinks Montreal should be annexed to the US.
St. Louis Cardinals
Dallas Cowboys: With Kim Kardashian being at all the Cowboys home games this season, it’s all the more reason to become a fan.
San Antonio Spurs
7. Boston Celtics: Boston has three teams on the list, the most of any city.
6. Pittsburgh Penguins: After filing for bankruptcy in 2005, the Penguins now have a strong fan base and an even stronger line of credit.
5. New England Patriots
4. Indianapolis Colts
3. DETROIT RED WINGS: no explanation needed.
2. Pittsburgh Steelers: Other than Boston, Pittsburgh is the only other city with two teams on Forbes’ list.
Boston Red Sox: Red Sox nation comes out on top again.