Posted on August 24, 2010 by thejerseychaser

According to Thebiglead.com, ESPN sources reveal Jay Mariotti’s days at ESPN are over. The famous sports personality and columnist was arrested for domestic violence over the weekend. Mariotti faces a court date on Sept. 17, and TBL believes the only way he will be back on the network is if all charges are dropped.

Mariotti is most famous for his role on the commentator show “Around the Horn,” which is on a week long hiatus. 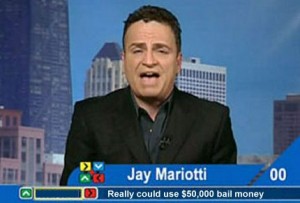 Jay Mariotti, famous sports columnist and ESPN personality, was arrested this morning for domestic violence. Mariotti and his girlfriend were at a club in Santa Monica and got into a fight, which escalated once they went to their home in Venice.