Jonathan Toews and Miley Cyrus at the MunchMusic Awards

Last night, Canada had their version of the MTV Movie Awards. At the MuchMusic Awards, Miley Cyrus both preformed and presented. It being Canada and all, Jonathan Toews join Cyrus to introduce music performer Drake. Cyrus congratulated Toews on winning the gold medal at the Olympics with Canada and of course winning the Stanley Cup with the Chicago Blackhawks… all while struggling to read her cue-cards.

Congratulations to the Chicago Blackhawks the 2010 Stanley Cup Champions

Congratulations to the Chicago Blackhawks who are the 2010 Stanley Cup Champions. In six games, the Blackhawks defeated the Philadelphia Flyers 4-3 in overtime to win their first Stanley Cup since 1961. Patrick Kane got the game winning goal, but the Conn Smyth Trophy for the Playoff’s MVP went to Blackhawks captain Jonathan Toews. 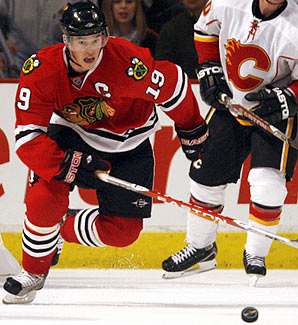 Jonathan Bryan Toews (pronounced /ˈteɪvz/ tayvz; born April 29, 1988) is a Canadian professional ice hockey centre who plays for and is captain of the Chicago Blackhawks of the National Hockey League (NHL). Toews is currently the youngest captain in the NHL. He was selected by the Blackhawks with the third overall pick in the 2006 NHL Entry Draft. He joined the Blackhawks in 2007–08 and was nominated for the Calder Memorial Trophy as NHL rookie of the year. The following season, he was named team captain, becoming the third youngest captain in NHL history at the age of 20. Toews competes internationally for Team Canada and has won gold medals at the 2005 World U-17 Hockey Challenge, 2006 and 2007 World Junior Championships, 2007 World Championships, and the 2010 Winter Olympics (a tournament in which he was named Best Forward). Toews won the Stanley Cup in 2010, along with the Conn Smythe Trophy for the playoff MVP. After winning the Cup, Toews passed Peter Forsberg as the youngest player to be inducted into the Triple Gold Club.