Posted on December 23, 2010 by thejerseychaser

After separating, a World Cup goal, a love child and a reconcile, Landon Donovan has filed for divorce from his wife Bianca. Mrs. Donovan is an actress on the TV show “Rules of Engagement,” and apparently the MLS doesn’t pay much since Donovan is asking for spousal support.

The couple have no children together, but it is still being debated who will take custody of the vuvuzela.

No love child for Landon Donovan 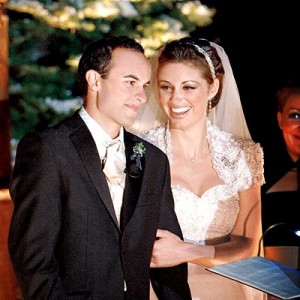 In the midst of the World Cup, US soccer star was informed he may have a love child with a Landon woman with whom he had a fling with while he was separated from his wife.

At tonight’s ESPYS, Donovan told E! Online he “will not be a dad anytime soon.” Donovan’s wife was on hand at the ESPYS where he took home best sports moment for scoring the winning goal in the US’ game against Algeria.

Landon Donovan has been called the “US Soccer’s Golden Boy” and has lived up to the name scoring clutch goals for Team USA during the World Cup. Now as Team USA was eliminated by Ghana, British tabloids are reporting Donovan fathered a love child with a British woman.

When asked about the allegations, Donovan revealed to SI.com: “I was informed of the possibility during the World Cup, and if I need to take responsibility, then I will provide the appropriate support.”

As thejerseychaser.com reported on Thursday, Donovan is reconciling with his wife with whom he separated with last August. According to US Weekly, “Donovan’s wife, Bianca Kajich wasn’t blindsided by the allegations and is not angry.”

Landon Donovan reconciling with his wife?

Landon Donovan scored the game winning goal in the US Algeria game and became the most desired man in America. But not so fast fellow jersey chasers, Yahoo Sports is reporting Donovan is reconciling with his estranged ex-wife, actress Bianca Kajlich. Donovan and Kajich separated last July after 3 1/2 years of marriage.

After Donovan led Team USA to victory, he had an emotional telephone call with Kajilich. He told Yahoo: “We are not officially divorced. We spoke last night; it was nice.” At a post-game press conference, Donovan went into further detail, “I’ve carried her with me through this tournament and she’s been a part of this with me. and I am lucky to have her.” When asked if he was back together with his wife, Donovan said: “What is this, Access Hollywood?”

The couple have no children and were married on Dec. 31, 2006. Whatever Kajilich is doing… keep up the good work!