Posted on December 3, 2010 by thejerseychaser

TJC Exclusive: The man behind the Michael Jordan/ LeBron James “Maybe You Should Rise” YouTube video

If you are not one of the 4 million people who have seen the Michael Jordan/ LeBron James “Maybe You Should Rise” video, you are probably living under a rock. The mashup of LeBron’s Nike “Rise” commercial and a 2008 AirJordan ad fooled many of us, and even made Miami Heat beat writer Ira Winderman come out and say the commercial was a spoof. The video has been mentioned on Around the Horn and even tweeted by Jordan’s son Marcus.

The man responsible for the video that has all of America talking is film student Tom Hinueber. In a Jersey Chaser exclusive, Hinueber answered our questions about the video… and I think his answers will surprise you!
END_OF_DOCUMENT_TOKEN_TO_BE_REPLACED

On Thursday, I posted this video of Michael Jordan responding to LeBron’s Nike “Rise” commercial asking fans, “What should I do” after the basketball star left Cleveland. The Jordan commercial was titled, “Maybe You Should Rise,” and pretty bad @$$.

It was one of the most epic Z-snaps between the Jordan LeBron rivalry. Jordan’s video quickly became one of the TJC most popular posts and generated more than half a million views in just four days on YouTube.

Both commercials were for Nike, making us question the validity of the Jordan commercial… but we were blinded with excitement that the greatest basketball player of all-time was calling out the self-proclaimed king.

That was until Miami Heat beat writer confirmed our suspicions. Ira Winderman of the Sun-Sentiniel tweeted:

YouTube Jordan-LeBron commercial a spoof. Another example of anything goes social-media age. Jumpman vs. Nike simply not going to happen.

The video was created by fan Tom Hinueber, and the Jordan audio is from an old Air Jordan’s commercial. Nice job Tom && #TEAMJORDAN. To follow thejerseychaser.com on Twitter click here!

LeBron James has often been compared to Michael Jordan throughout his career. But unlike LeBron, Michael Jordan stayed in Chicago for his entire career (until he came back from retirement in 2001) and brought the city six championships in eight years. Jordan even turned down lucrative contracts to play fore bigger market teams like the New York Knicks.

Earlier this month, LeBron released a new Nike commercial called “Rise” asking the world “What should I do?” after he became Public Enemy No.1 for leaving the Cleveland Cavilers. Jordan has come out with his own commercial for AirJordans and responds to LeBron.

While I am not a huge Michael Jordan fan, I did like the movie Space Jam, and this commercial gave me goosebumps and will probably make my boyfriend cry.

The original “Rise” commercial can be seen below…

Michael Jordan’s sons are being investigated for a crazy weekend in Las Vegas. Earlier in the week, Marcus Jordan tweeted:”Last night was stupid… 35k at Haze… Totals 50k something the whole day.. Damn!! Going to the pool again today.. Gotta relax!” 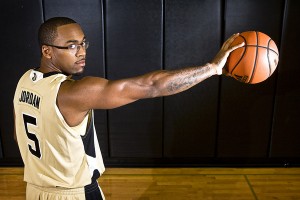 Michael Jordan later had his son remove the Tweet… but as those pestty PSA campaigns always say, once its on the internet, you can never get it back! Now, both MGM Grand, where Marcus Jordan was staying, and Norm Clarke of the Las Vegas Review Journal, ““Heard about it yesterday. We’re looking into it.”