Posted on October 1, 2012 by thejerseychaser

The Europeans’ Ryder Cup comeback over the Americans came just in the nick of time, especially for Rory McIllroy. The World’s No.1 golfer arrived just 10 minutes before his Sunday tee time as the Europeans entered the match’s final day trailing 10-6.

McIllroy had to receive a police escort to Medinah Country Club because he thought his match started at 12:35 local time not Eastern Time. The 23-year old ran from his car to the practice putting green to hit a couple of putts while eating an energy bar as fans chanted “Where is Rory” and “Central Time Zone.” 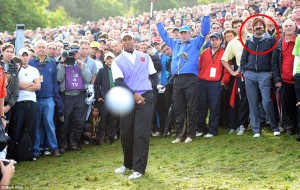 A photo of Tiger Woods at the Ryder Cup has gone viral, and now the internet a buzz is wondering who the cigar guy fan is in the background of the photo. An internet blog is even going so far to offer a $1,000 reward for the identity of the Groucho Marxian golf fan. The blog Befrugal.com posted the following contest rules:

Entry: Contact us with proof of Cigar Guy’s identity and a way to get in touch with him.

Eligibility: Must be 18+ to enter. Void where prohibited by law. US & Canada only.

Winner selection: The $1,000 reward will be awarded to the first person who identifies Cigar Guy to us, and does so before any other website publishes his identity. Winner selection is contingent on Befrugal.com being able to verify Cigar Guy’s identity.

Only One Prize: We are offering only one prize, and there can only be one winner. If another website publishes Cigar Guy’s identity before Befrugal.com, no prize will be awarded. 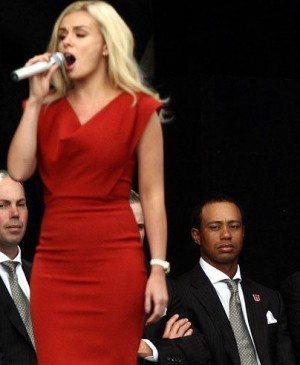