Posted on November 17, 2010 by thejerseychaser

While Eva Longoria and Tony Parker have denied reports they are getting a divorce, many news outlets are coming forward confirming the split and siting cheating allegations from both sides.

According to the Huffington Post, Longoria has discovered an emotional affair between Parker and a mutual female friend. Longoria  has discovered hundreds of text messages exchanged by the pair.

Sources told US Weekly, “Eva is heartbroken by the betrayal…Once the trust was lost, the marriage was over.”

These are not the first cheating allegations the couple has faced, back in 2007 it was rumored that Parker had an affair with French model Alexandra Parresant.

After TMZ broke yesterday’s now recanted story, NBA sources made a connection that Longoria had cheated on Parker with his teammate and Antonio Spurs guard Alonzo Gee. The connection was made after the Spurs put Gee on waivers. While sources close to the couple have said it was just a coincidence, sports blog Terezowens.com is reporting that Gee was the other man.

Tony Parker and Eva Longoria are not getting a divorce

Earlier today TMZ reported a story that Tony Parker and Eva Longoria, and the couple has now released a statment saying the story is false. TMZ reported that Parker filed for divorce at the Bexar County Courthouse in Texas and apparently confirmed by two clerks at the courthouse.

The couple has been married since July 7, 2007 (7/7/07), and Longoria can often be found courtside at San Antonio Spurs games cheering on her husband.

In the statement released by Longoria’s rep, it says that Tony did not file for divorce and does not even have a divorce lawyer… or maybe he just didn’t tell her? Keep chasing #TEAMEVA!

Currently the Spurs are 8-1 tied for first in the NBA Western Conference. Parker leads the team in points with 34.2 for the season.

Image via Angeli from Purepeople 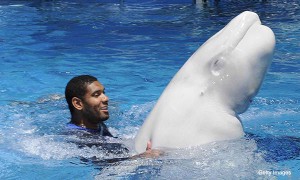 NBA star Tim Duncan swam with whales at Sea World. Joining Duncan were San Antonio Spurs season ticket holders who won a “Swim with Tim” prize. The experience was given away at the Tux-N-Tennies Dinner and Auction put on by Sea World.

The Spurs not be making any off season moves, but they sure are making up for it in the pool!