Posted on February 13, 2011 by thejerseychaser

… now that the protesting in Egypt has stopped, being an ESPN reporter covering a Peruvian soccer tournament may just be the most dangerous journalism assignment.

Share It
Posted in Other Sports | Tagged ESPN, Soccer | Comments Off
Posted on October 22, 2010 by thejerseychaser

After shocking all of England, when Manchester United star Wayne Rooney announced he wanted to leave the club, he has dropped another bombshell by resigning a 5-year deal to stay with the club.

Rooney apologized to the club and his teammates and wants to earn the respect back from his fans who he offended when he announced he wanted to leave Manchester:

“I will give 100% and try to build that relationship back. The fans have been brilliant with me since I arrived and it’s up to me through my performances to win them over again.”

While details of Rooney’s contract are not being released it is speculated he will be making £150,000 a week, or $235,664, making him the highest paid player in Manchester United history. Now that’s a lot of hookers!

Share It
Posted in Other Sports | Tagged Machester United, Soccer, Wayne Rooney | Leave a comment
Posted on October 22, 2010 by thejerseychaser

Peruvian soccer team Sport Ancash drugged its opponents Hijos de Acosvinchos by slipping tranquilizers into their Gatorade. Ancash gave the Gatorade to Acosvinchos before the soccer game and told them it was an energy drink.

Five minutes into the game, three players including Acosvinchos defenseman Andy Salinas collapsed on the field, a fourth player also became sick but did not lose consciousness. Salinas told the Peruvian TV show A Primera Hora:

“From what I remember… the goalie from the other team was being treated for an injury… Someone from the their (Sport Ancash) coaching staff, it must have been the equipment manager, the physical therapist or maybe the water boy, stepped onto the field and we shared drinks… I don’t remember who gave me the drink, but it wasn’t sweet, it had a bitter taste to it.”

“At the hospital, tests found benzodiaepine, a sedative in the players’ bloodstream. When Generaccion.com interviewed Sport Ancash’s president, Jose Mallaqui said:
“I was able to find out that the players ate rotisserie chicken and had some energy drinks before the game, which ended up hurting them.”

Share It
Posted in Other Sports | Tagged Peru, Soccer | Leave a comment
Posted on October 12, 2010 by thejerseychaser

Man gets soccer jersey tattooed to his body 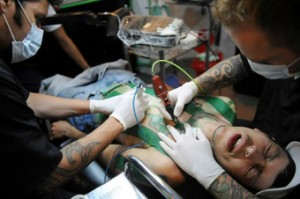 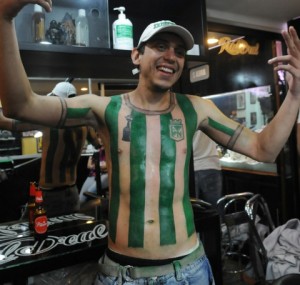 Soccer fan Felipe Alvarez tattooed the Atletico National jersey onto his body. The tattooed jersey is of murdered Altetico legend Andres Escobar. Escobar was murdered at a nigh club in 1994, but his memory will live on forever in Alvarez’s tattoo. No one will be questioning Alvarez’ fanhood.