Posted on January 1, 2012 by thejerseychaser

Spartans to play Trojans in Greece?

After playing an outdoor hockey game in front of 75,000 people and a basketball game on an Air Force carrier in the Pacific Ocean, Michigan State has decided to up the ante by playing a basketball game in Greece against the Spartans ancient rival Trojans.

In an interview with the Lansing State Journal, MSU athletic director Mark Hollis revealed, “We’ve been talking about Greece for a while.”

The game against the USC Trojans would be at Panathinaiko Stadium in Athens, Greece. Anthens hosted the first modern Olympic Games in 1896.

The USC Trojans are trying to change a tarnished image after its football program was accused of a flurry of NCAA player violations, but that may be hard to do now that a USC student has been certified an NFL agent by the NFL Players Association.

Teague Egan is a senior at USC and is known for his golf cart chauffeur business, but he has now upgraded his business endeavors to be an NFL agent.

Egan has the finical backing of his father who owns Alamo Car Rental and told the LA Times he hopes to represent between four in six of his friends who play football at USC in the upcoming NFL draft. Egan said:

“Like [famed NFL agent] Drew Rosenhaus who represented every Miami kid after going to school at Miami, I intend to represent every USC kid.”

END_OF_DOCUMENT_TOKEN_TO_BE_REPLACED 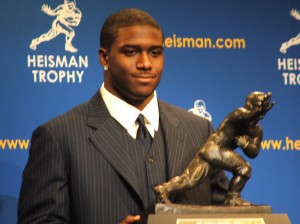 In the midst of the mega-conference expansions, USC has been slapped with harsh penalties for NCAA violations. On Thursday, the committee announced USC’s football program would forfeit 13 wins (won during the time of the violations), an Orange Bowl victory, two-year bowl ban, and 30 docked scholarships.

The fate of Bush’s 2005 Heisman Trophy is not decided by the NCAA but by the Heisman Trust.

Somewhere Tennessee football fans are smiling. After USC head coach Pete Carroll left the Trojans, Tennessee football coach Lane Kiffin left to take the job. Carroll is the new coach of the NFL Seattle Seahawks, while Kiffin will have to overcome recruitment hurdles because of the NCAA violations.

When asked about the sanctions Carroll said, “The agenda of the NCAA Infractions Committee took them beyond the facts. The facts don’t merit the sanctions.”

USC is hopping to appeal the penalties. In 2002, Alabama suffered similar consequences a two-year bowl ban and forfeited 21 scholarships for similar NCAA violations.