Video: Virgina Tech basketball coach elbows daughter to hug one of his players

After Virgina Tech won an ACC tournament game, head coach Seth Greenberg’s elbowed his daughter in the face when he went to hug a player. Greenberg’s daughter is a cheerleader for the Hokies and tried to congratulate her dad after the win. Unfortuently for VT, they did not make the tournament and Greenberg has to live with the burden of why he chose a player over his own daughter! 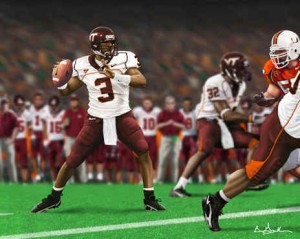 On Saturday, during Virgina Tech’s game against Central Michigan, Virgina Tech junior offensive guard Greg Nosal lost the tip of his finger but refused to leave the game. The incident happened when Nosal’s finger was jammed in between two helmets. Nosal’s pinky finger was severed halfway down the nail. The training staff recovered Nosal’s missing finger tip in his glove. Nosal refused to leave the game and continued playing. Good thing Virgina Tech didn’t lose, the Hokie’s beat Central Michigan 45-21.

Nosal was able to get his finger stitched back together, but he missed post game interviews