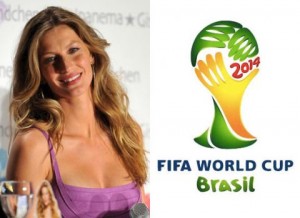 After 64 matches, Spain won its first World Cup title beating the Netherlands, 1-0. The lone goal came from Spain’s Andres Iniesta on a pass from Cesc Fabregas in the 116 minute. It was Iniesta’s second goal of the tournament. The 1-0 win was the fourth consecutive game Spain won 1-0 and broke the Netherland’s 25-gam unbeaten streak. 14 yellow cards were handed out in the game including a controversial drop-kick by Netherland’s De Jong to the chest of Spain’s Alonso. Netherlands struggled in passing, completing only 69 percent. Spain becomes just the eighth country to win a World Cup title, congrats Espana!

Share It
Posted in Other Sports | Tagged Spain, World Cup | Leave a comment
Posted on July 11, 2010 by thejerseychaser

I may not know Spanish very well (Detroit Tigers), but I do know this is the cutest World Cup post-game interview. Check out Spain’s goalkeeper captain and former regulation hottie, Iker Casillas, kissing his girlfriend Sara Carbonero while she interview him for the Spanish network Telecinco.

Jersey We’d like to Chase: Spain is going to their first ever World Cup, and what better regulation hottie than the Spanish antional team captain Iker Casillas. Casillas is a goalkeeper and plays for Real Madrid. Casillas may have not faced a lot of shots from Germany in the semifinals but we’d still like to jersey chase him ; )

Recap: In the semifinal game that would determine who would play the Netherlands in the World Cup Final, Spain beat Germany 1-0. The only goal of the game came in the 73rd minute from a header by Carles Puyol. Passing seemed to be Germany’s biggest challenge. Standout playmakers Bastian Schweinsteiger and Mesut Ozil only completed 76.5% and 78.0% passing respectively. This is Spain’s first World Cup Final, but the country has been the best team in Europe for the past 4-years. Since November 2006, Spain has only lost two games, which includes its group stage opener loss to Switzerland. Spain is just the fourth team to make it to the World Cup Final after losing its opening World Cup game. The World Cup Final will be on Sunday at 1:30ET as Spain faces the Netherlands.