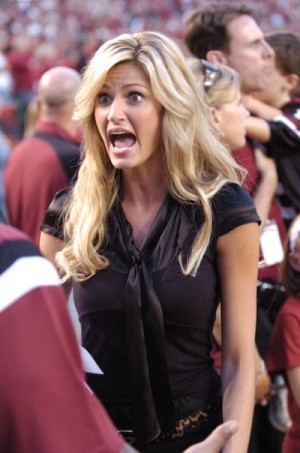 ESPN sideline reporter Erin Andrews is rumored to be dating Green Bay Packers QB Aaron Rodgers. These two were reported to be dating back in the summer but was overshadowed by Andrews’ possible romance with her Dancing With The Stars partner Maksim Chmerkovskiy. According to sources, Andrews was on hand at the Packers Monday Night Football loss to the Chicago Bears. Andrews watched the game in Rodgers’ private box with his family and went out to dinner with them after the game.

Andrews grew up a Packers fan… wonder what ESPN thinks of the alliance between the two Aarons/Erins.