Posted on October 23, 2010 by thejerseychaser

Favre contacted Sterger again in 2009; Sterger will keep quiet if Favre pays her

The Brett Favre saga continues…. the NY Post is reporting that Brett Favre contacted Jenn Sterger last summer when he was in New York. Favre was in town to appear on “Joe Buck Live” on HBO.

At that time, Favre had not signed with the Minnesota Vikings and Sterger was not employed by the Jets, when the veteran quarterback called her.

The NFL’s investigation on the Brett Favre sext messages remains at a standstill. Officials met with Brett Favre this past Tuesday, but Sterger will not cooperate with NFL officials. Sterger is allegedly trying to work out a settlement with Favre. A source close to the story said:

“The Settlement would include a confidentially agreement between the two that would effectively stop the NFL, which does not have subpoena power, from speaking with Sterger about Favre.”

Deanna Favre was on Good Morning America this morning to talk about her new book and addressed allegations that her husband Brett Favre sent sext messages to former Jets sideline reporter Jenn Sterger.

When asked about her husband’s sext messages, Deanna said, “Faith has gotten me through many difficult struggles, and it will get me through this one.” Deanna even recited a passage from the Bible, “We were talking earlier about a verse I have on my fridge — Isaiah 41:9-13 actually is on my fridge right now. ‘Don’t be afraid. I will uphold you with my victorious right hand,’ and that’s what I’m leaning on.”

Brett Favre met with NFL officials on Tuesday, but Deanna did not say if the allegations were true or false.

Deanna’s new book is titled: “The Cure for the Chronic Life: Overcoming the Hopelessness That Holds You Back” and was co-written with her pastor.

Deanna has been married to Brett Favre since 1998, but the pair first dated in high school. In 2004, Deanna was diagnosed with breast cancer and her brother died all in the same week. Deanna has also stood by Brett Favre during his two separate stints in rehab.

This afternoon Brett Favre met with NFL Vice-President of Security Milt Ahlerich to investigate the sext messages Favre sent to former Jets sideline reporter Jenn Sterger. The pictures were allegedly sent in 2008 but were recently released by Deadspin.com.

Favre and his agent Bus Cook showed up at the Minnesota Vikings headquarters and left 6 1/2 hours later. Tuesday is traditionally an off day for players.

Streger is not cooperating with the NFL in its investigation, prompting many to speculate that Sterger is negotiating a settlement with Favre. 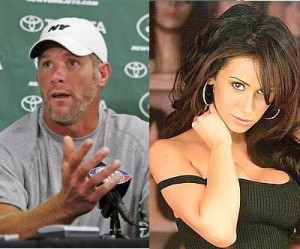 How much did it cost to ruin Brett Favre’s career? According to Terezowen.com Deadspin paid $75,000 for the voicemails and pictures for Brett Favre sexting NY Jets sideline reporter Jenn Sterger. Deadspin Editor-in-chief AJ Daulerio said, “The biggest thing for us was the voicemail messages. The area code was a 601 area code, he’s from Mississippi, that’s a Mississippi area code. It seems like for someone to impersonate him that’s a large step to take to get after Jenn Sterger.” Sterger used a third party source to sell the photos, so she is only halfway selling herself out.