Posted on January 29, 2012 by thejerseychaser

After the Detroit Lions made the post season for the first time in 10 years, star wide receiver Calvin Johnson has decided to reward his receiving core by taking them to the NFL Pro Bowl in Hawaii.

Megatron was named to the Pro Bowl team, but a sore achillies heal will keep him out of the game. Instead, Johnson has flown Nate Burleson, Stefan Logan, Maurice Stovall and practice-squad receivers Marcus Harris, Nate Hughes out to Hawaii via private jet.

The man largely responisble for the Lions’ turnaround is in the last year of his rookie contract. Detroit’s new contract is expected to make Johnson the highest paid wide reciver in the league, which hopefully means more trips to Hawaii for Burleson and others.

The Detroit Lions were robbed of a victory by the Chicago Bears, after the refs called back a 35-yard touchdown by Calvin Johnson. While Johnson touched both feet on the ground and maintained possession, the officials ruled that he did not maintain control long enough. The rule is explained below:

The rule in question states, “If a player goes to the ground in the act of catching a pass (with or without contact by an opponent), he must maintain control of the ball after he touches the ground, whether in the field of play or the end zone. If he loses control of the ball, and the ball touches the ground before he regains control, the pass is incomplete. If he regains control prior to the ball touching the ground, the pass is complete.”

The video is above! && you guys can decide for yourself…. Go Lions! 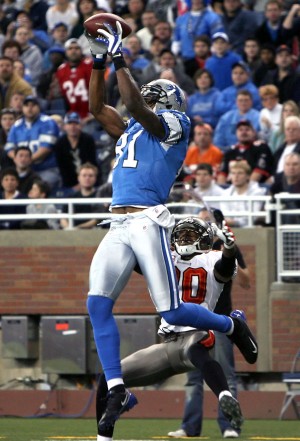 Calvin Johnson, Jr. (born September 25, 1985 in Tyrone, Georgia) is an American football wide receiver for the Detroit Lions of the National Football League. He was drafted by the Lions second overall in the 2007 NFL Draft. He played college football at Georgia Tech. Johnson has a rare combination of size (6 ft. 5 in., 236 lb/ 196 cm, 107 kg), speed (4.35 sec 40-yard dash), strength, leaping ability (more than 45 in or 110 cm vertical jump), body control and hand–eye coordination. It is often mentioned that he is also very humble and well-mannered, and did well academically at Georgia Tech. He has been nicknamed “Megatron” by Lions coaches and fans.