Posted on October 10, 2012 by thejerseychaser

It is NFL tradition for rookies to pay for the team dinner during the season’s Rookie Night of the bye week, but DE first-year Shea McClellin, who grew up on a farm off Chicken Dinner road, was not expecting the Chicago Bears to rack up a $38,000 tab.

Lucky for McClellin, the $38,000 check was a fake planted by team veterans.

“I saw it, and I was like, ‘I don’t know how I’m going to pay for this.’ I don’t think my debit card can go that high,” McClellin said.

The total price of the dinner, which was held at Mastro’s Steakhouse in Chicago, was about a third of the fraud check. Israel Idonije tweeted a picture of the bill with the hashtag #RookieNight.

While McClellin’s bill was only a prank, other rookies were not so fortunate. In 2010, the Dallas Cowboys stiffed rookie Dez Bryant with a $54,000 bill for refusing to carry veteran Roy Willams’ pads after practice.

Did Lil Wayne try to make Dez Bryant carry practice pads? The Dallas Cowboy and famous rapper reportedly got into a fight on Sunday at Liv on South Beach in Miami.

Lil Wayne and his entourage reportedly fought with Bryant over a debt he owed to Endurance Capital Fund, which helps entertainers and athletes buy luxury items. The alleged firm is linked to Lil Wayne’s Young Money Records.

The Dallas Cowboys wide receiver has denied any rift between the rapper, tweeting on Thursday, “Let’s quit with the false stories now….me and this man don’t have a problem with one another lol.”

Rookie hazing is a part of the professional sports culture (right Dez Bryant). Look at the latest prank the Toronto Raptors veterans pulled on rookie Ed Davis. Despite having the highest field goal percentage on the team, the Raptors were quick to remind him he is on the low end of the totem pole.  Teammate Reggie Evans Tweeted “This is what happen when u a rookie @eddavis32 car. LMAO.” 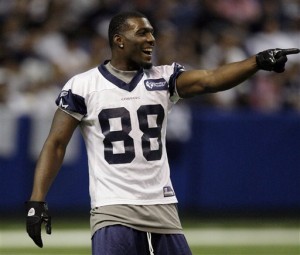 Dallas Cowboys rookie Dez Bryant caught a lot of flack during NFL training camp after he refused to carry veteran Roy Williams’ practice pads.  The Cowboys got their revenge on Bryant after they stuck the rookie with the $55,000 bill at a steakhouse. The team was out to dinner at Pappas Bros Steakhouse in Dallas, with many of the teammates taking to Twitter to boast about the food.

Jesse Holley: “Woke up this morning and scramble me some cheese eggs to go w/ my left over 20oz Kobe steak from last night. Mmmmmmm!”

Felix Jones wrote before the dinner: “Our offensive rookies are buying dinner … I remember those days. Sure don’t miss them the least bit.”