Posted on September 18, 2011 by thejerseychaser

Nothing wrong with a little rookie hazing… right Dez Bryant? Just ask Florida Marlins reliever Jose Ceda who was locked in the bullpen bathroom during a game at the Phillies’ Citizen Bank Park.

Rookie hazing is a part of the professional sports culture (right Dez Bryant). Look at the latest prank the Toronto Raptors veterans pulled on rookie Ed Davis. Despite having the highest field goal percentage on the team, the Raptors were quick to remind him he is on the low end of the totem pole.  Teammate Reggie Evans Tweeted “This is what happen when u a rookie @eddavis32 car. LMAO.”

Florida Marlins haze rookies by making them play dress up 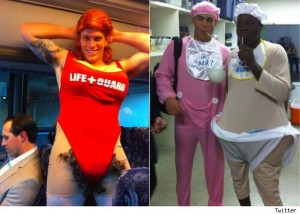 The Florida Marlins season is all but over. While the Marlins won’t be heading to the post season, that doesn’t mean they can’t have a little fun and ended the season by hazing the rookies. While on their final road trip from Milwaukee to Arizona, the Marlins passed the time by making the rookies dress up in drag.

A little hazing never hurt anyone (take note Dez Bryant), and the pictures were posted on Twitter. 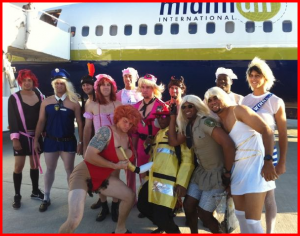