Posted on August 15, 2011 by thejerseychaser

Congratulations to Hilary Duff and her NHL husband Mike Comrie who announced Sunday they are pregnant with their first child. Duff announced the exciting news on her official blog saying on the couple’s one year wedding anniversary, “I can’t believe it has already been a year, time really flies when you’re having fun! We also want to share the exciting news that…… BABY MAKES THREE!!! We are extremely happy and ready to start this new chapter of our lives. Thanks to everyone for the continued love and support throughout the years!”

News came to a suprise to fans of the couple when in May Duff told Access Hollywood that her and Comrie would wait to start of family so she could release another album. But Comrie may just be playing Mr. Mom since he announced he would be taking a break from hockey after having hip surgery.

The 30-year old Canadian last played for the Pittsburgh Penguins but is now an unrestricted free agent. Duff, who is 23, and Comrie met when he played for the New York Rangers. 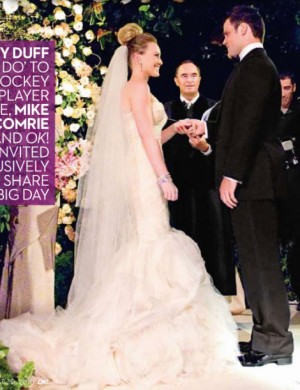 Trouble in tabloid magazine paradise? August’s Jersey Chaser of the Month Hilary Duff got married to hockey player Mike Comrie. The couple sold their pictures to OK! Magazine in exchange for their $1 million wedding to be paid in full. The Comrie’s were paid half the money up front, with the other half to come after magazine sales. However, the wedding issue failed to even sell 300,000 copies… so looks like Lizzie McGuire is paying for half the wedding herself. What I can’t understand is that Comrie is a trust fund baby? What is the exchange rate on the Canadian dollar again?